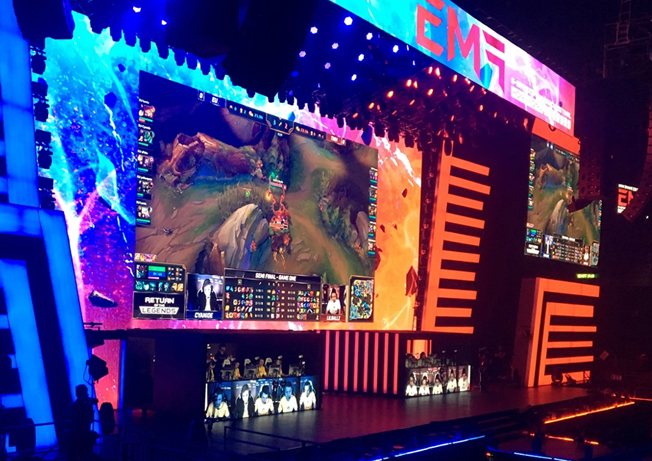 “E-sports” is currently a marketing buzzword – but what exactly does it mean? Martina Ganzbuhl, one of our PR consultants, learned more about this trending topic at the “Kids.Teens&Marke” (“Kids.Teens&Brands”) conference in Cologne and explains how marketers are reaching their young target audience via e-sports.

Let’s start with the facts: e-sports is defined as competitive playing of computer and video games in multi-player mode. Its supporters see e-sports as a discipline in its own right, although it is not officially recognised as such (at least, not in Germany). However, the political sphere and the German Olympic Federation (DOSB) have a positive attitude to these online competitions and have made moves towards official recognition. This recognition even forms part of the platform in the coalition agreement between the CDU/CSU and SPD parties. If e-sport meets all the DOSB’s selection criteria, it could even be represented at the next Olympics.

E-athletes compete either as individuals or as teams (also known as clans). They have their own leagues and many tournaments: the ESL is the largest league of its kind, with currently over six million active players and half a million active clans. The most popular games include League of Legends, Dota 2, Fortnite, FIFA 18 and Counter-Strike.

How can fans take part in electronic sports? Quite simply, it’s a digital activity, with e-sport being live streamed, for example over the Azubu.tv streaming service or the market leader, Twitch.tv. The latter reaches an average of fifteen million users per month, who each spend an average of 421 minutes watching. Linear TV is also cashing in on the trend, with Sport1 and Sky broadcasting a range of e-sports events, while traditional print media such as Bravo Sport or Kicker also regularly report on e-athletes and e-sports.

The growing commercial significance of e-sports is reflected particularly in the value of prize money, which can reach millions. The world’s most successful e-athlete is Kuro Salehi Takhatsom from Berlin, who competes under the name of “KuroKy” as captain of the “Team Liquid” clan in the online multiplayer battle arena game, Dota 2. At the age of 28, he has already won over $3.5 million!

Growth in the e-sports community is not just about the value of the prizes: the e-sports fan community continues to grow, with tournaments already filling stadiums and event halls with over 15,000 (mainly male) spectators! As a comparison: the Bundesliga – the nationwide league for Germany’s favourite sport of all time, recorded an average of 42,421 spectators in its first division and 21,747 in the second division. As such, it’s no wonder that businesses and sports teams such as FC Schalke 04, VfB Stuttgart, FC Bayern Munich and RB Leipzig have recognised the trend and started their own e-Sports teams.

But still – how can marketing experts take advantage of the enormous reach of this trending sport? As well as traditional sponsoring, there are even further opportunities to reach a young target audience of sports and technology fans – e-athletes like KuroKy are also influencers, and therefore ideally suited to product endorsements. In addition, tournaments and events are a great way to convey marketing messages. Businesses that have already used e-sports successfully in their marketing operations include Coca Cola, Red Bull, Nissan, McDonalds and Intel. We’ll be happy to discuss whether e-sports is an appropriate channel for your business via a no-obligation discussion on +49 (0)89 1792 8781.