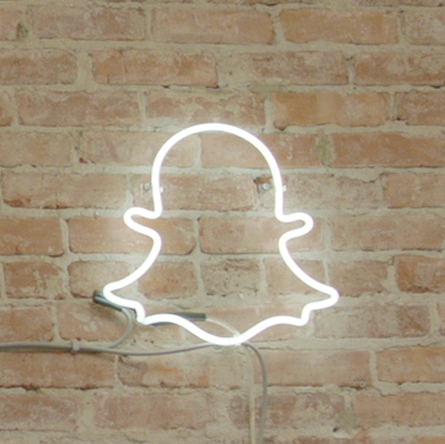 Somewhere between an instant messenger and a social network, Snapchat constantly brings new features to the media industry. The numbers speak for themselves – Daily 100 million users from all over the world send 700 million photos as well as racking up six million video views which makes for enormous traffic. The app enjoys high popularity especially amoung young people. 16 per cent of twelve to 19-year-olds in Germany say that Snapchat is among top three must-have smartphone apps. We had a look into what it is about this app that draws in its millions of users and the potential that companies see in it, for instance in the toy and retail industries.

On Snapchat you can chat, video call, send voice messages, or ‘Snapchats’ to other users. ‘Snapchats’ are photos or videos that only last for up to ten seconds. The user can edit their Snapchats with text, emojis, drawings or filters. In addition, users can also transform their selfies with animated live effects that change their facial expressions into characters such as a creepy monster or a cute animal. Snapchat makes these different effects – called Lenses – only available on certain days, opening up ever new design opportunities. What makes Snapchat so unique is the fact that the sent photos and videos are only temporarily visible to other users. The user sends their Snapchat directly to one or more contacts, and sets a timer for up to ten seconds to decide how long the recipient of the Snapchat can view it. They can also add a Snapchat to their own ‘Snapchat Story’ which means other users can view it for up to twenty four hours.

Room for improvement when it comes to monitor success

If a user thinks a selfie is particularly nice or well edited, then they can save it directly. The only way to save someone else’s content is with a screenshot, however, the original user can see who screenshot their content. At the same time, the number of screenshots taken is a good way to measure how successful a Snapchat is. This is the main way to measure a Snapchat’s success, in addition to Snapscore which is composed of the number of sent and received Snapchats and helps other users determine how intensively someone uses the app. You can also see the individual views for each image or video.

Even the best Snapchat would be worthless if nobody were to notice it. Firstly you can find someone, and be found, using Snapchat usernames or Snapcodes. Therefore to get noticed you have to advertise your account and username, because a searching for a keyword or hashtag won’t get you too far on the messenger.

How Snapchat works in the marketing mix

The fascination with Snapchat lies within its authenticity and transience. Snapchat isn’t about posting the most beautiful and perfect selfies possible, but rather about the spontaneity of it all. Businesses can use the app as a versatile communication channel which is a great way to provide a look behind the scenes.  For example, they can create their own account and place brand messages or run employer branding. The REWE Group wants to gain new young apprentices with its recently launched account rewekarriere, as well as appeal to its audience using what they all have in common. In their Snapchats, employers respond to questions and requests sent by potential apprentices.

A brand does not necessarily have to make Snapchats on their own if they wish to advertise there. Snapchat offers companies the opportunity to design their own ‘Lenses’ and makes those “Sponsored Geolenses” available to users for a limited time as branded animation effects.

Companies also have the opportunity to take advantage of the success of particularly popular Snapchatters. A successful campaign ran in October 2015 by the American toy manufacturer Sphero for its new BB-8 robots. The company cooperated with five influential Snapchatters, to gain particularly wide coverage, who would have BB-8 robots in their Snapchats. Result: Within 24 hours the campaign generated more than 10 million views and the little robot sold out quickly in 14,000 stores. One of the five Snapchatters was Shaun McBride. With his exceptionally creative Snapchats under the username Shonduras, he is one of the most successful Snapchatters ever. In addition to his own original content, he posts branded Snapchats in cooperation with companies such as Disney, Samsung and Red Bull.

In Germany, the Youtuber Sami Slimani uses the app in an especially professional manner – true to his image of the sweet, shy boy next door – he mixes posts from collaborations under his own pictures. Legally, a branded post on social media has to be marked as such, but is not clear in which form. In order to preserve their own credibility and reputation, it is important for both the business and the Snapchatter to clearly indicate when content is part of a collaboration.

So Snapchat holds potential benefit for companies. The users consume Snapchats with particular care because they have to actively choose to see a picture or a story which means they are making conscious decisions about what content they see. However, the app also has its drawbacks. The handling is anything but self-explanatory, and to get attention it turns out to be far more difficult than on other social networks. As the younger generation are the ones using Snapchat, companies that want to reach them as their target audience should dare to venture the app.