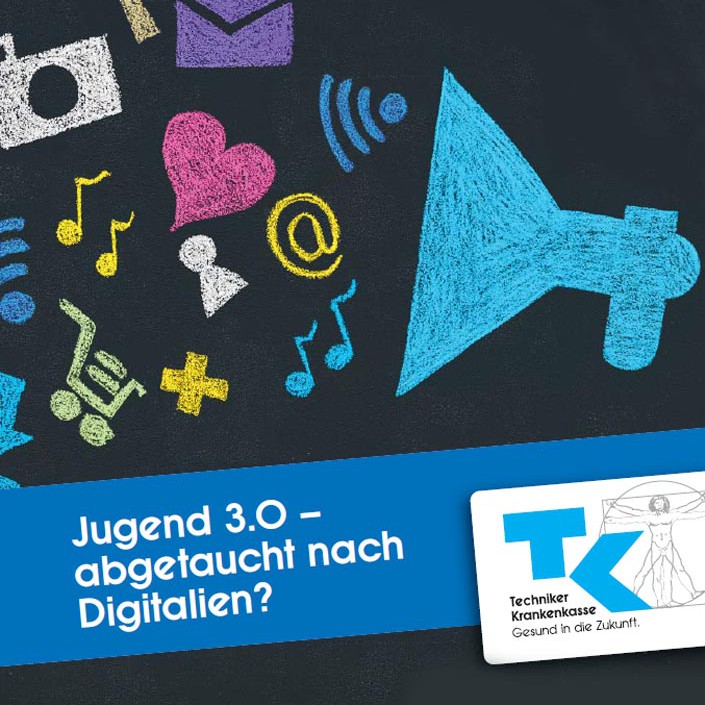 Detail from the cover of the brochure “Jugend 3.0″ by Techniker Krankenkasse

German adolescents between twelve and 17 years are digitally very well equipped. They mostly own several online enabled devices and use them most frequently for homework, chatting with friends and watching videos. The surprising fact: Facebook seems to be overestimated by far.

This comes out of the survey “Jugend 3.0 – abgetaucht nach Digitalien?”, which was conducted by market researchers at forsa on behalf of Techniker Krankenkasse health insurance. The study that ran from July to August 2014 is interested in the media consumption habits of adolescents. The Gesellschaft für Sozialforschung und statistische Analysen mbH (forsa) asked 1000 parents with children aged between twelve and 17 years by means of computer-aided phone interviews.

The questioned parents indicated that nearly one-fifth of the teens possess a tablet (21 percent). Nearly half of them have their own TV in their bedroom. 57 percent play on a mobile or stationary games console and are additionally equipped with computer, laptop or notebook (64 percent). No later than at 16 every adolescent has a mobile phone, which is a web-enabled smartphone in 79 out of 100 cases. Only few teens have a mobile without internet connection or do not use internet at all (10 percent of boys and 13 percent of girls).

Conversely, this means that nearly 90 percent of all youths surf the internet, chat, skype or email. Most frequently they use it for researching school related content (85 percent). Nearly as important to them is the communication with friends: 83 percent of all teens use the internet for chats via messenger services like WhatsApp. Watching videos on websites like YouTube or Vimeo is very popular as well (82 percent). Social networks are also popular, but find themselves in comparison somewhat behind: Nearly 55 percent of the youths are often on communities like facebook. It is also interesting to see that more than a third of all teenagers look up products online or do online shopping.

Based on these findings, Griffiths Consulting advises brands to firstly improve their offering on YouTube and then think about how WhatsApp can be possibly used. There are some interesting approaches available already. Only as a next move should brands take action on facebook.